It’s the day after your Kundalini awakening. Now what are you going to do?

If you’ve heard of Kundalini, you know it’s the Sanscrit term for the hidden energy subsystem in the human body. You may also know that Life Force is the closest jargon-free English approximation for the term Kundalini. I use the two terms interchangeably, even though the Sanscrit Kundalini is more widely employed. So whether you say Life Force, Chi, Orgone, or Kundalini, you’re probably aware of the burgeoning scientific and lay interest in this topic. Nevertheless, up to recent times, material scientists have considered Life Force a fruitless, if not vain, field of study.

More and more people, however, now reject the premise that the Life Force is some kind of quixotic pseudoscience; there are just too many credible anecdotal accounts. And too many people using their bodies as laboratories in the quest to identify and define the entirety as well as the significance of the Kundalini/Life Force. I call these individuals Life Force scientists.

Now Life Force Science may sound like new age mumbo-jumbo. That is not the case. Much like a material scientist, who examines the physical world, the Life Force scientist explores the metaphysical world, using the empirically-based scientific method to verify his findings. To investigate metaphysical secrets, the Life Force scientist uses his/her body as a laboratory, never hesitating to experiment with his/her own being. Life Force Science is really an extension of evolutionary biology. You see, Life Force scientists have found that Kundalini is capable of speeding up personal evolution, optimizing and refining the being during a single lifetime, so that the next reincarnation of the energy field known as YOU will be more highly evolved.

The basis of Life Force Science is sexual alchemy, the term used for the process known as sexual sublimation. Sound strange? Not if you realize that the Buddha, Jakob Böhme, Lao Tse, Gopi Krishna were Life Force scientists. In their own way, so were Louis Pasteur and Dr. Barry Marshall, the man who exposed himself to the bacteria causing ulcers in order to prove he discovered a cure in the laboratory of his own body.

What’s more, whether you realize it or not, if you are a meditator, Yoga practitioner, an Alchemist, a Raw Fooder, or Tai Chi student, you are a Life Force scientist. So is the person seeking to manage his/her own health, supervise his/her personal growth, or direct his/her destiny. It’s all about evolutionary transformation. That’s the goal of Life Force Science — transformation and rejuvenation. Only the labels separate us as individuals. Life Force, or Kundalini, cuts across all labels. So forget about the labels and concentrate on what works and what doesn’t. How can you know what works? Your body will tell you what works and what doesn’t. And that’s important because not all methods work and not all paths lead to Nirvana. Not all baseball players hit .300. Not all economists can fix the economy. So, although all methods offer transformation, not all of them work.

How can your be sure a method works? Your body must be the final, and the only, arbiter. Sure, you can try all methods until you find one that works. That’s the hard way! Why not try a method that’s been tested for centuries — Golden Flower Meditation. JJ Semple rediscovered this method buried in the symbolism of The Secret of the Golden Flower. He spent years practicing it. Deciphering the Golden Flower One Secret at a Time describes his search for the perfect method and reveals the secret techniques of sexual alchemy he mastered. Through the ages, many have used this method to perfect themselves. It’s one of the oldest meditation methods in existence, and one of the most powerful. Said to have been developed by the Buddha, Golden Flower Meditation should be part of every Yoga and Meditation teachers resources. The key to Golden Flower Meditation is the backward-flowing method, a technique of sexual sublimation so secret, the ancients swore an oath never to reveal it. In his book The Backward-Flowing Method: The Secret of Life and Death, JJ Semple provides extensive detail on the techniques of sexual alchemy.

Life Force Science explores the knower, the individual experimenting with his/her body. Self-observation used to be at odds with the scientific method, but we know better now. You can’t remove the experimenter from the experiment, the observer from his/her observations. The purpose of Life Force Science is to transform the knower, to make him transcendent, not from an intellectual standpoint, but in a holistic, evolutionary sense. As Gopi Krishna so wisely observed, “The first reality we come across is consciousness. The world comes later. We know first ourselves and then the world. So the wiser course is first to understand the knower. What modern thinkers have done is to ignore or bypass the knower, forgetting that it is the knower that is doing it.” How does this work?

The history of mankind is full of anecdotal accounts of the sudden acquisition of strange and wonderful powers. For instance, after activating his Kundalini, Gopi Krishna, the author of Kundalini: The Evolutionary Energy in Man, was able to speak German and other foreign languages without ever having studied them. This type of occurrence is not rare. The only problem is that until now the proper study of reliable methods for activating hidden powers has never been undertaken. Enter Life Force Science, a field of study dedicated to finding a scientific approach to activating the hidden powers of the body — One that works!

The Life Force phenomenon, notably autonomic self-healing, structural and muscular restoration, spontaneous appearance of talents, aptitudes, or faculties, and slowing down the aging process, are as old as life itself. Yet, we know so little about these occurrences, and still less about how to make them occur in a reliable fashion. Now, for the first time, a publishing company dedicated to the scientific exploration of the body’s hidden powers, the basis of which is sexual alchemy or sublimation.

The Hidden Powers of the Body

Kundalini is an indispensable tool for healing. Golden Flower Meditation (GFM), the method of meditation contained in The Secret of the Golden Flower, produces reliable, consistent results. Kundalini acts as a warranty for an instrument that once worked perfectly. What instrument am I talking about? The human body! WOW, you say, I didn’t know my body had a warranty. Well, it does; it’s called Kundalini. Gopi Krishna called it an “upgrade mechanism.” Want to upgrade to First Class? No problem your warranty is valid. You can use it at any age.

Kundalini is the Basis of Higher Consciousness

And while Kundalini heals nerve trauma, it is also the doorway to higher consciousness. The only doorway? No, not the only one, but one, which, if activated, is sure to expand and heighten consciousness. Higher consciousness? That’s a term bandied about almost to the point of cliché-dom. What exactly does it mean?

Consciousness basically means awareness. Being aware. Using all the senses and then some, the some being an ability to feel, see, and connect beyond the purely sensual boundaries of material life — beyond the physical into the metaphysical. What form does this take? Higher consciousness doesn’t necessarily lead to enlightenment or special powers, but does not preclude them either. It’s a progressive, dimensional shift: you begin to make better decisions, you connect with the underlying fabric of Nature. You’re part of It. Your perception extends beyond the visible; slowly, almost as if in a permanent dream state, your very fibers interact and intertwine with everything around you. Your body becomes a weathervane for the do’s and don’ts of natural living; you are more creative. Does it mean you are perfected? No, but you have a head start on the practice of self-control. You realize what it’s like to be out-of-control and you start to be aware of how you affect others.

And it all starts with breathing, sitting in a quiet place to call in the warranty and upgrade to First Class. 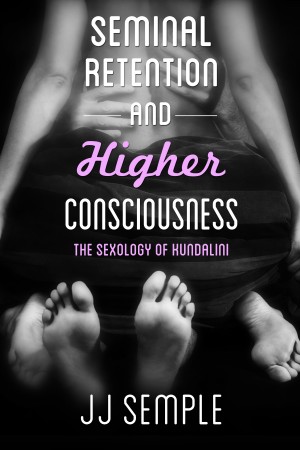